A strong 6.0-magnitude earthquake struck western Iran near the border with Iraq early Sunday, killing two people and injuring more than 200, officials said. The shallow quake hit 26 kilometres (16 miles) southwest of the city of Javanrud in Kermanshah province, the US Geological Survey said, near the site of a powerful quake last year that killed hundreds.

Sharidari said the two dead were a pregnant woman and a 70-year-old man who suffered a heart attack. IRNA quoted local officials saying that electricity had been cut to 70 villages but that it was restored to at least 50 by dawn. The provincial head of the Red Crescent, Mohammad Reza Amirian, said there had been at least 21 aftershocks.

He said there were potential problems with drinking water due to damaged infrastructure in villages, but that it had not yet been necessary to distribute food and tents. Kermanshah governor Houshang Bazvand told the Tasnim news agency that electricity had been temporarily cut to several villages.

A crisis centre was set up, with hospitals and relief organisations placed on alert. But the local director of crisis management, Reza Mahmoudian, told the Mehr news agency that “the situation was under control” and no request for help had been sent to neighbouring provinces.

There were reports that the quake was felt far across the border into Iraq. Images on social media showed people being rushed to hospitals, but suggested relatively light damage to infrastructure. Iran sits on top of two major tectonic plates and sees frequent seismic activity.

Kermanshah is still recovering from a devastating 7.3-magnitude quake that struck last November, killing 620 people in the province and another eight people in Iraq. That quake left more than 12,000 people injured and damaged some 30,000 houses, leaving huge numbers homeless at the start of the cold season in the mountainous region.

There was criticism that much of the new social housing built as part of a scheme championed by ex-president Mahmoud Ahmadinejad had failed to withstand the tremor. President Hassan Rouhani said those responsible would be held to account.

Iran’s deadliest quake in recent years was a 6.6-magnitude tremor that struck the southeast in 2003, decimating the ancient mud-brick city of Bam and killing at least 31,000 people. In 1990, a 7.4-magnitude quake in northern Iran killed 40,000 people, injured 300,000 and left half a million homeless, reducing dozens of towns and nearly 2,000 villages to rubble.

A magnitude 7.3 earthquake struck Tuesday near Yaguaraparo, off the northeastern coast of Venezuela, according to the US Geological Survey. 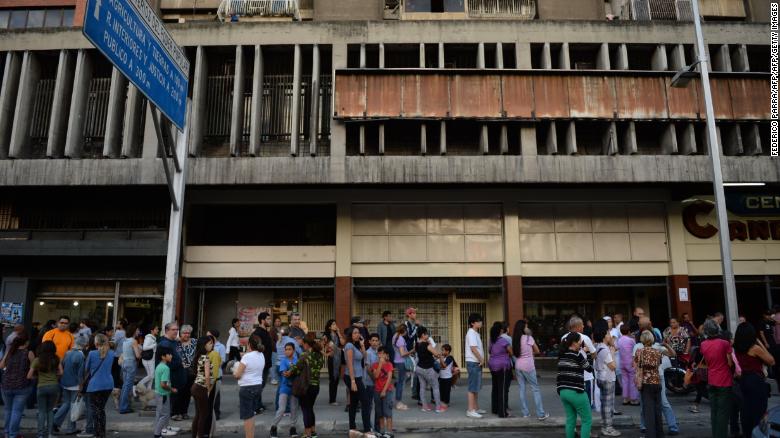 No injuries or deaths were reported, but several buildings were shaken causing structural damage, the country’s Interior Ministry said. Stefano Pozzebon, a journalist in the country’s capital Caracas, told CNN he felt shaking for at least one minute, and a seven-floor building he was in was evacuated.

The USGS said the quake had a depth of 76.5 miles. No tsunami warnings were issued.

Irald Cabrera, a translator for a tour company in Güiria, further east on the northern coast, told CNN that the earthquake lasted about a minute, with three aftershocks shortly after. The city is 43 miles from the epicenter of the quake.
Cabrera, 34, said he is used to seismic activity, but this was different.
“This one was strong, and we were afraid,” he said.

The top of an abandoned skyscraper in Caracas leans outward after the earthquake on Tuesday. In Caracas — more than 370 miles west of the quake’s epicenter — one abandoned skyscraper, a well-known home for squatters, suffered severe damage causing the top floors to lean precariously over the street.

The surrounding area was evacuated. Over 20,000 personnel from Venezuela’s Civil Protection and Disaster agency were deployed to help anyone in need, Reverol said in a tweet.

A strong magnitude 6.3 earthquake has struck Indonesia’s Lombok island. The quake’s epicenter is located at a shallow depth of 7.9km. The island has been hit by a series of quakes recently, killing hundreds of people. The quake struck 64 km (40 miles) from the city of Mataram with a population of 400,000 people, the United States Geological Survey (USGS) reports. The tremor hit Lombok’s northern shore, some 6km (four miles) from the Mount Rinjani volcano.

One person received a light injury and two more lost consciousness during the quake, the spokesman for the National Disaster Management Authority (BNPB) tweeted, adding that first responders are still collecting data on the ground. 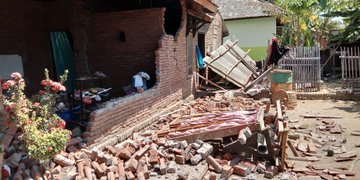 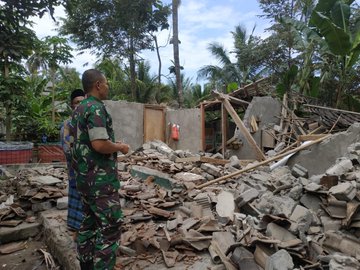 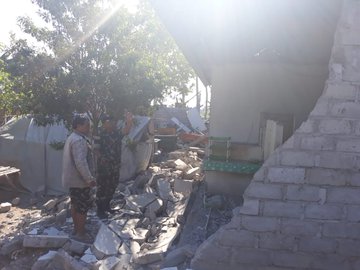 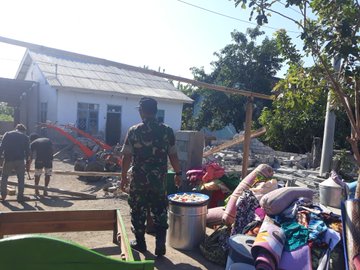 Several houses have been damaged, with most of the destruction taking place in the East Lombok area. The earthquake also led to rockslides at Pergasingan Hill. 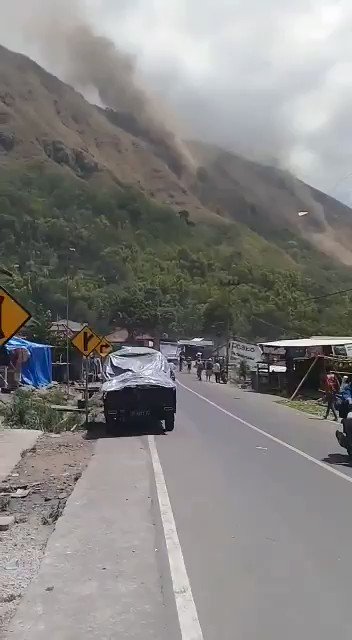 In early August, Lombok suffered a magnitude 6.9 quake, followed by over 300 aftershocks. A total of at least 436 people have been killed as the tremors leveled buildings. That quake damaged tens of thousands of homes and left several hundred thousand people displaced. It also initially triggered a tsunami warning that was later called off.

Indonesia is located in a seismically active are and is frequently shaken by earthquakes. In 2004 it was hit by one of the deadliest quakes in recent history, a magnitude 9.1-9.3 event that triggered tsunami waves up to 30 meters tall. Over 220,000 people were killed or left missing then.

A 8.3-magnitude earthquake hit areas near the Fiji islands at 8:19 a.m. Sunday, according to a preliminary measurement of the China Earthquake Networks Center (CENC). The epicenter was monitored at about 18.12 degrees south latitude and 178.06 degrees west longitude, the center said in a statement.

Commentary In Response to Article By: Allen Cone

Aug. 19 (UPI) — Major earthquakes struck the Pacific on Sunday — about 200 miles from Fiji and Tonga and in Indonesia’s Lomback island, where hundreds died in a tremor less than two weeks ago.

The Fiji-Tonga area was hit by three quakes, the largest one 8.2 magnitude, and Indonesia was struck by a pair of tremors, the strongest at 6.9. The U.S. Geological Survey reported the largest one near Fiji and Tonga was 348 miles miles deep at 12:09 a.m. Greenwich Mean Time (12:09 p.m., local time) and was followed four minutes later by a 6.3 one and four later with a 6.8 temor at similar depths nearby. The biggest quake was 168 miles east of Levuka in Fiji and 275 miles west of Neiafu in Tonga.

A destructive tsunami was not expected, and there was no threat to Hawaii, the Pacific Tsunami Warning Center said.

Only minor damage was reported in Tonga and no reported damage in Fiji, according to Radio New Zealand.

The Lomeback island quake was centered 3.7 miles northeast of Sembalunlawaang at 4:10 a.m. GMT (11:10 a.m. local time). The USGS said it would have been felt to a moderate level on the island and less in the neighboring tourist island of Bali.

The second one 10 hours later was 6.9, south of Belanting. No deaths were reported on Lombak but residents fled landslides.

On Aug. 15, a 6.9-magnitude earthquake struck off the waters north of Lombok island, killing 436 people. The earthquakes Sunday are in the Pacific Ring of Fire, an arc of fault lines circling the Pacific Basin.

A tornado thrashed its way through a Massachusetts area, injuring at least one person and causing significant damage, officials said Saturday.

In the wake of the twister that bore through Webster, a town near the Connecticut border, fire and rescue officials posted on Facebook that there were downed trees and power lines and people left without electricity.

The tornado was confirmed by the National Weather Service Boston on Twitter. In a followup post, the agency said the twister had estimated maximum wind speeds of 100-110 mph.

[3p] Latest list of damage reports; while TORNADO is not indicated it has been confirmed in Webster, MA; we’ll update this later as the survey team finishes up their survey w/ strength / path-length details … list: https://forecast.weather.gov/product.php?site=NWS&issuedby=BOX&product=LSR …

“Three buildings have been condemned due to severe wind damage,” Webster Fire/Rescue wrote on Facebook. “Of that, two of the buildings are currently being torn down due to the damage leaving them structurally unsound.”

Roughly two dozen people had to leave their homes due to damage, officials said. 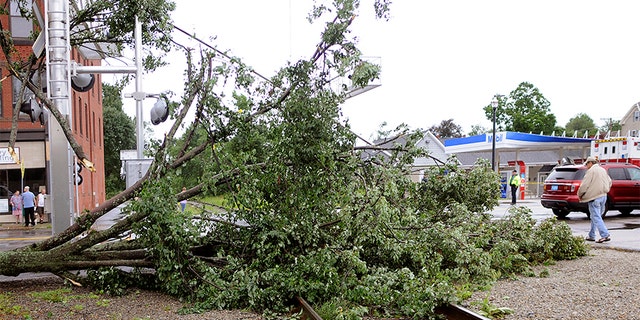 A maple tree was uprooted and toppled onto the railroad tracks on Main Street after a storm passed the area on Saturday in Webster, Mass. (Steve Lanava/Worcester Telegram & Gazette via AP)

A person suffered injuries after “part of a roof fell on top of a car,” officials said in the post. The woman had been driving in town when the tornado hit and was taken to a hospital with minor injuries, Webster police said, according to The Associated Press.

Images of the destruction in the area captured a number of fallen trees and debris-covered streets.

From burning wildfires to premature potatoes, the heatwave which has swept across Germany has had an influence on more than just the mercury gauge.
Cooling fans of all shapes and sizes have sold out in stores across the country, with some German residents reporting buying a fan is impossible – even in the largest cities.

Annabell Feith, press spokesperson for Saturn-Media Markt, told The Local that the demand for all types of fans was so high that Saturn and Media Markt stores across the country were having trouble restocking.

“In Germany we have had a really long heatwave – for the last two weeks all cooling devices have been in high demand. Nationwide – as in Berlin – there has been a demand for cool air,” Feith said. “We keep reordering for all of our stores – but the demand is so high, that if one store gets five, then we are really quickly sold out.”

While running low on fans is by no means unheard of during Germany’s hot summers, it has been the scope of the problem that has hit home this time around. Despite Tuesday night being the warmest in Berlin’s history, the demand hasn’t been isolated to any one region, with Germany’s two largest electronics chains struggling to cope with demand in one of the hottest summers on record.

“Each summer it can take place – it really depends on how many days in a row it stays hot. This year because all of the German states are hot, it is the same for all our stores across Germany,” Feith said. “As you can imagine, all of our suppliers have prepared for summer. But they can only produce a certain amount and the producers are over-ordered. “If you want to buy a fan, we encourage you to call the store before you come in – but you must be quick and monitor the situation!”

The demand hasn’t been limited to fans however, with the German Municipal Water Company (VKU) encouraging Germans to refrain from overwatering their garden during the warm weather.

Even worse, breweries are reporting a shortage of glass bottles as beer sales see a significant spike across the country. Moritz Fiege brewery in Bochum appealed to their customers on Facebook to return their used glass bottles so that they can be refilled for the days to come. The company said:

“We need your help! Great weather + great beer = thirst. The catch? Although we regularly buy plenty of empties, we are almost out of bottles. Therefore before you leave for your summer vacation, please bring your empty Moritz Fiege beer bottles to your liquor store – fast!”

Despite concerns about bottle supply, the increase in sales has been welcomed by brewers across the country, with beer sales already struggling to rebound from Germany’s early world cup exit. Unfortunately for Germans struggling to stay cool, coping with the oppressive heat has just gotten a little harder.